Conrad Skinner, AIA, practices architecture and furniture design. He has resided in Santa Fe, NM since 1985. He has also traveled widely in Asia and Europe, living in Tokyo, Japan and Rennes, France. He speaks fluent Japanese and French.

A graduate of Reed College, Conrad majored in art and art history. During nearly three years’ living in Japan in the 1970s, he worked closely with artists and architects and showed sculpture in a solo exhibition at Gallery Te. In New York subsequently, he fabricated and installed large-scale sculpture for artist Dennis Oppenheim, including for public art exhibitions Art on the
Beach and the group show, Metaphor, at the Hirshhorn Museum in Washington, DC.

After designing many residential and commercial projects in New Mexico and New York, Conrad received his M.A. in Architecture from University of New Mexico in 2002. In 2010, on learning that the Paolo Soleri Amphitheater on the campus of the Santa Fe Indian School was threatened with demolition, Conrad undertook to advocate its preservation and to nominate the Amphiteater to the National Register of Historic Places. He delivered a talk on the project at TEDxABQ in September 2014.  His ongoing work, The History of the Paolo Soleri Amphitheater became the theme project of the 2016 SITE Santa Fe International Biennial, Much Wider than a Line, with a gallery he designed featured as the introductory exhibit of the show. 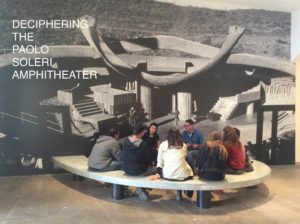 Architecture is in Conrad’s DNA. He learned early on how to build boats from his naval-architect father, and to honor the environment from his environmental-activist mother; her citizen-led efforts to clean up the Chesapeake Bay were models for ensuing initiatives. Henry Churchill, Conrad’s maternal grandfather, was an architect and urban planner in New York and Philadelphia who designed and built the first Bauhaus-inspired skyscraper in Manhattan.

An eye for nautical line and a sensitivity to beautiful materials that design climate-sensitive spaces identify Conrad’s work. His awareness and appreciation of architecture stretch from his childhood into today.